This type of saw is essential in your arsenal. Its short blade boasts high torque and can easily slice through metal or masonry. 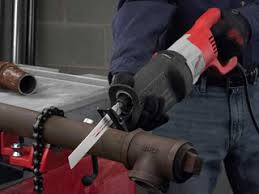 Reciprocating saws are also involved in the making of molding or skirting. Whatever the purpose, there are a few things you should know before buying.

How to Choose a Reciprocating Saw

While all reciprocating saws can produce straight cuts, commercial-grade machines, as well as some of the mid-range models, also incorporate an orbital action. Manufacturers call them either linear or orbital reciprocating saws to differentiate between the two.

Similar to the band and miter saws, reciprocating saws follow a simple principle when it comes to their power, the more they have, the better. The power you need to look for varies based on the type of saw you decide to buy.

However, the easier way to assess which is the best reciprocating saw for you is by figuring out the watts-hour of your tool by multiplying amperage by voltage.

Another thing you should consider before buying is the speed you need. Speed is determined by the length of the stroke and stroke speed per minute.

The first refers to the depth of the cut. Most reciprocating saws have an average length of stroke of 1-1/8 inches, which allows slicing through most materials. Some entry level saws have shorter stroke lengths that vary between 7/8 inches and 1-1/4 inches.

Regarding the stroke speed per minute, this number indicates how fast the blade moves back and forth. As you can imagine, the speed varies widely between entry level and top end units, from around 2,600 SPM to 3,000 SPM.

The actual speed of the tool is determined by multiplying the stroke length by stroke speed. If you’re wondering which tool to pick, know that a reciprocating saw with variable speed up to 3,000 strokes per minute and a stroke length of 1-1/8 inches is your best bet. 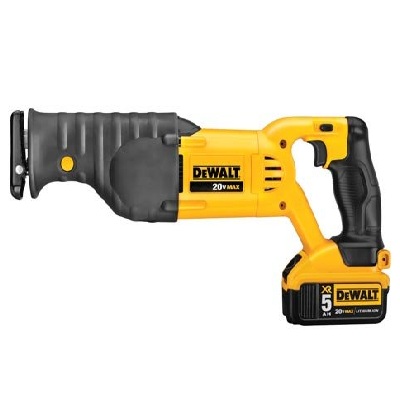 If you’re looking for a powerful reciprocating saw for construction or demolition work, the DEWALT DCS380P1 could be the one you were looking for. Powered by a reliable 20-volt 5Ah lithium-ion MAX battery, this power tool cuts through masonry like a knife through melted butter.

This reciprocating saw lives up to the expectations no matter what the job site is throwing at it. It comes with a variable speed trigger that goes up to 3,000 strokes per minute. Furthermore, you can change the blades quickly thanks to the 4-position blade clamp. At the same time, the 1-1/8-inch stroke length ensures suitability for most applications.

Undoubtedly one of the best reciprocating saws, the DEWALT DCS380P1 has all the features expected from a best in class. Its only drawback is the lack of battery kit from the pack. However, the manufacturer gives the possibility to purchase the tool with battery kit or the battery kit separately. Balanced, easy to handle, and performing, this is an excellent tool for the pros.

The corded counterpart of our favorite pick, the DEWALT DWE304 appeals to professionals and comes at a rather affordable price. This tool is powered by a 10-amp motor designed to withstand heavy-duty applications. Use the saw to cut through wood, metal, and even masonry without risking to run out of torque.

Designed to withstand the most varied applications, this reciprocating saw boasts a variable speed trigger that drives the blade up to 2,800 strokes per minute. This feature, combined with the 4-position blade clamp increase the overall versatility of the tool. Furthermore, the saw is well balanced and easy to maneuver.

Having little to envy to its cordless brother above, the DEWALT DWE304 is one of the most reliable and convenient reciprocating saws on the market. It has an easily adjustable blade that can cut through most materials; it is lightweight and easy to handle. Ready to use right out of the box and compatible with an array of blades, this saw brings true value for money. 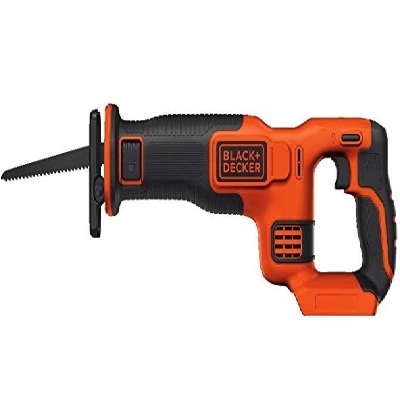 The BLACK+DECKER BDCR20B is an excellent reciprocating saw for novices and amateurs. It comes at an affordable price and includes a convenient blade. The best thing is the quick and effortless no-tool blade change system that allows you to switch between blades depending on your project. With a stroke length of 7/8 inches, this tool is literally up to anything.

Powered by a 20-volt MAX lithium battery, this reciprocating saw boasts an incredible power and can cut through most materials. It is perfect for construction and demolition works, as well as framing and molding. The battery pairs with all compatible tools in the system and recharges in less than five hours.

Running at speeds up to 3,000 strokes per minute and easy to use in most circumstances, the BLACK+DECKER BDCR20B appeals to beginners and amateurs. Its strength is the incredibly low price point, while the name of the brand is a guarantee for quality. Not the most durable but undoubtedly performing, this reciprocating saw is a perfect starter tool.

Beating almost all its competitors regarding affordability, the SKIL 9206-02 is one of the cheapest reciprocating saws on the market. However, this doesn’t mean it’s poor quality. The tool comes equipped with a 7.5-amp motor that provides ample power for most construction and demolition projects.

This tool boasts an enhanced control thanks to the counterbalance feature. This feature reduces vibrations and user fatigue and improves maneuverability. At the same time, a pivoting foot provides additional stability when cutting through hard materials such as metals or masonry.

Cheap yet high-quality, this reciprocating saw packs all features you could ask from a best in class. We like its heavy-duty metal gear housing that adds strength and durability. Vibration control and enhanced maneuverability also allow you to enjoy all the benefits of this tool. 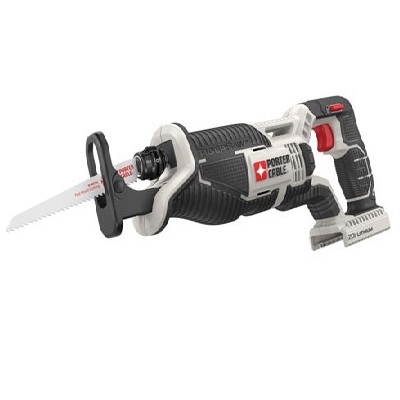 If you’re after a reciprocating saw designed to reach all tight spaces in no time, then the PORTER-CABLE PCC670B might be the one you were looking for. This tool has a compact and slim design and a 1-inch blade stroke, just what it takes to work in confined spaces without worries.

Another nice thing is the speedy blade change thanks to the tool-free blade release system. You can switch from one blade to another in a breeze, to ensure suitability for each project. The tool is strong enough to cut through wood, metal, and masonry.

Cutting at speeds of up to 3,000 strokes per minute and powered by an interchangeable battery, this reciprocating saw incorporates all you could wish from a top pick. Like most PORTER-CABLE tools though, this saw has quite a lot of plastic components, which are not as durable as those manufactured by other brands.

Whether it’s a construction or demolition project, or cutting of molding or skirting, a reciprocating saw is an essential tool in your arsenal. The market is full of choices, and now you even know which are some of your best bets. So, pick your favorite saw and get ready to finish your tasks in a breeze.