You may have thought about bringing your energy consumption down by taking advantage of a natural power source: the sun. Not only can you store and convert something free into something usable, but you’re also reducing carbon emissions and energy waste. 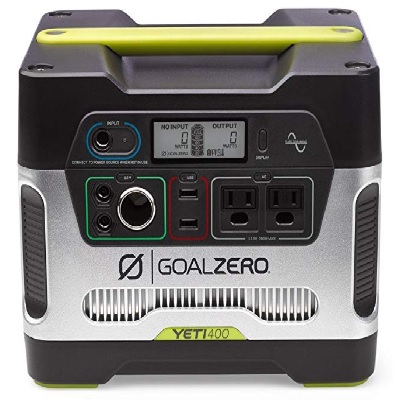 Emerging technologies include generators that store and run on solar power. If you’re away from home, you don’t have to rely on traditional power or fuel. All you need is a reliable solar-powered generator that stores solar power while you do other activities.

What Are Features of a Solar Generator?

A solar generator typically consists of the following:

Key Elements to Consider When Purchasing a Solar Generator

There are five elements to check when looking for the right solar generator. An understanding of each will give you a better grasp on how they can work to your advantage and at what capacity they should be functional.

An important feature is a generator’s capacity to store energy. It has to be reliable after the sun sets, when energy required can’t be replenished until the sun returns.

To measure this, calculate the battery’s capacity. Identify its voltage (in volts) and amp hours (Ah). For example, a 12V battery might be rated at 150 (Ah). Compute the watt hours by multiplying the volts (V) by the amp hours (Ah), then dividing by 100. This lets you know how much energy the battery provides.

However, most manufacturers won’t recommend that you drain a battery because it can lead to a shorter life cycle. To preserve your battery, avoid draining it to zero capacity.

The photovoltaic (PV) input of the panels determines how long it takes for batteries to charge during the day or how much energy is transferred to the battery for storage during charging periods. For example, a solar generator with PV panels at 300 watts can convert that much into the battery while under full sun. It is best to have a PV input rate equal to or greater than the battery capacity.

Since the sun is not uniformly bright every hour, expect the PV input to be lower than usual at certain hours. However, PV panels with solar tracking or the ability to change position based on where the sun is to have a higher chance of filling a battery faster. It’s safe to say that the sun is at its brightest six hours in a day, so the optimal charging period is 6 hours. Anything more can affect a generator’s usability during other parts of the day.

Batteries power devices using direct currents (DC). However, most devices run on alternating currents (AC). For stored energy to be compatible with regular devices, it needs to be convert from DC to AC and then further convert the low battery volt into the appropriate AC voltage. This could either be 110V, 120V, 220V, or 240V.

The inverter rating tells you how many watts you can pull from the generator at any time. Some buyers use this as the baseline in determining if the generator is strong enough for their home. However the optimal ratio of battery to inverter rating is 1.5:1. This makes sure that you’re not depleting the battery to the max, which could mean a shorter lifespan and quicker energy depletion. For example, if you have a battery rating of 1500 watt/hr, your inverter should be at least 1000 watt/hr.

Size and weight factors heavily in this decision, and so does the amount of noise produced while discharging. Some generators can be easily wheeled away, others need a flat surface to be mounted on, and others can be placed just about anywhere. As mentioned before, solar panels can be stationary or move at an angle to track the sun. Take into account if you have sufficient space for additional features like these.

Also consider the materials used in the generator. Plastic is lighter and protects it from rust, but ensure whether the plastic components are durable enough. Some generators have casings that’s more reliable against wear-and-tear.

Batteries also come in different forms. A lead-acid battery costs less, but may require more maintenance, such as ensuring only 2/3 of its capacity is consumed every time to avoid decreasing its lifespan. Its voltage also tends to drop during usage, and expect the generator to be heavier.

A lithium battery is lighter with a longer lifespan, but is quite expensive. It doesn’t require maintenance like a lead-acid one, and can be drained down to as low as 10% capacity to maintain optimal lifespan. Charging and discharge is more efficient and more consistent, and it’s 2-3 times lighter than lead-acid.

A well-balanced generator system allows you to maximize charging and usage time without sacrificing either. After learning the key parts of a generator and their respective features, you can make an informed decision on which generator can provide you with sufficient energy when you need it most.

Portable solar power generators are often favored due to their convenience. Each one featured on this list is versatile enough to be charged in three different ways: solar energy, a DC supply, or an AC port. 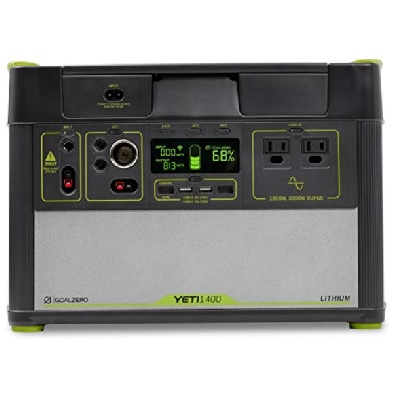 This generator comes with wi-fi capabilities so you can control it with your phone, and multiple charging ports to allow several devices to be powered up simultaneously. It runs silently and is highly portable due to its size. However, the Goal Zero Yeti is not weather nor dustproof. It has an LCD panel that displays the percentage of power left and gives you an estimate of hours left on the charge and how many hours needed to charge to full power. It can last through 500 full-charge cycles before losing 20% of its capacity. You may choose from a variety of solar panels offered by the same manufacturer at different price points. 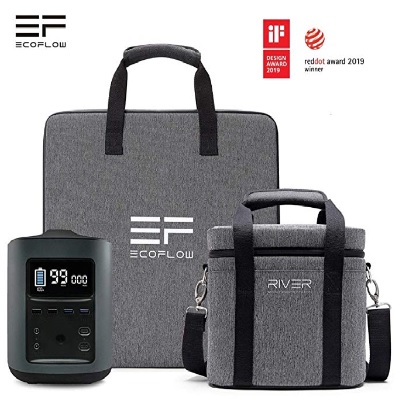 4.5 of 5 Stars
Check the latest Price on Amazon

The River boasts of its ability to run 11 electrical devices all at once. With its miniature form, no one would believe it packs a punch. It can go through 500 full-charge cycles before any noticeable decline in performance, while your devices are protected by its Smart Power surge protection. It has a digital display to show you its current battery life and it is cased in waterproof material. The River is also easy to bring around with its practical and ergonomic handle. 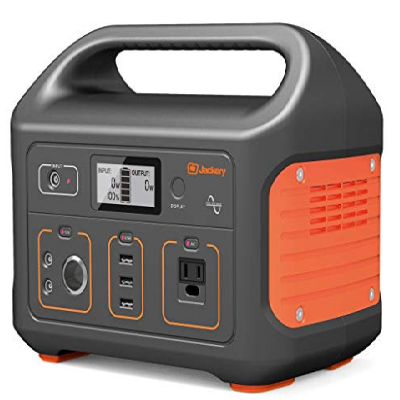 3.5 of 5 Stars
Check the latest Price on Amazon

The Explorer 440 is built for outdoor use, with the unit housed in a compact but sturdy case with a handle. An LCD monitor on one side displays its power input and output, and the percentage of battery life left. It also has an LED light to make it easy to view immediate surroundings in the dark or when fussing over cables.

The younger sibling to the Goal Zero Yeti 1400, this smaller​​ unit is great as an instant power source during power outages or nighttime outdoor activities away from home or the city. Much like the Yeti 1400, its contrasting colors make it easier to spot and operate in the dark. It has the same LCD display functions, but it doesn’t have wi-fi capabilities. 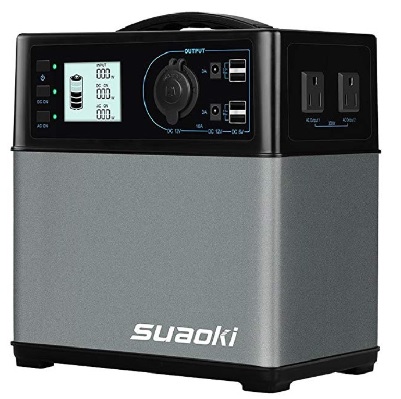 The Suoaki comes with an impressive battery management system which allows users to get the most of their unit and monitor charging and usage. This feature prevents the unit from over-charging, overheating, and over-current. It can power a fridge with its 600W surge pure-sine wave inverter, but can remain at minimal wattage for smaller devices. It has a solar charge controller and solar MC4 wires for recharging under the sun. 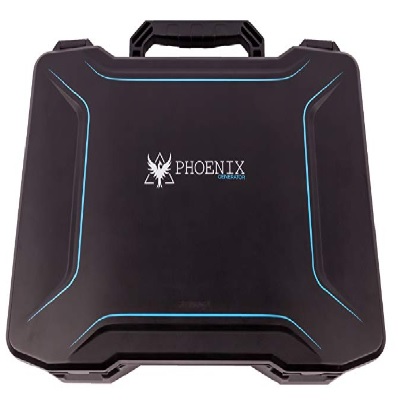 4.5 of 5 Stars
Check the latest Price on Amazon

In briefcase form, the Renogy Phoenix is easy to carry around and place anywhere you wish. It’s not awkward and the unit protects its parts from the elements. Just prop it open in a bright area and let it absorb the power of the sun. It is also one of the cheapest solar generators available without having to buy separate units of solar panels. However, you can expand your basic unit to include 120W solar panels if you wanted to pack more juice into this handy briefcase. You will also be glad to know that it can handle 1500 full-charge cycles.

A solar generator works by harnessing energy from the sun through solar panels, then storing it in a battery for later use. The utility or device to be powered is attached to the generator, where energy goes through the inverter and converted into a compatible electric current that runs through the device, your house, or office.

With the growing trend of sustainable power sources making this easily available, it is a great addition to your home or outdoor gear. 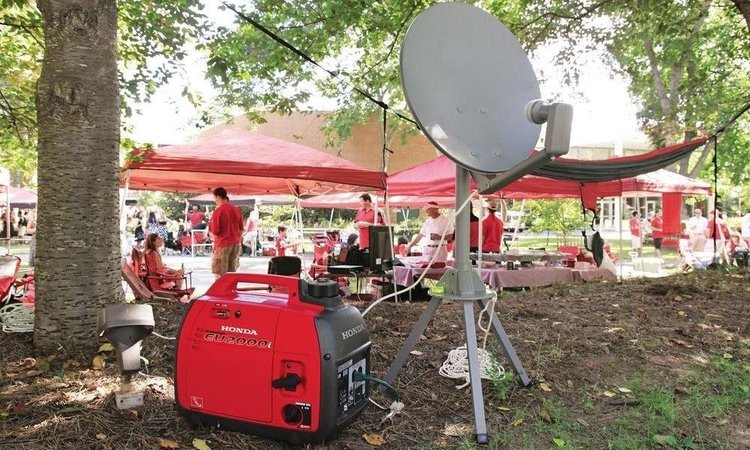