The DuroMax XP4000S generator is a durable gas-powered machine built by a reputable company to meet energy demands for home and outdoor use.

This gas operated generator is designed to give power and work quietly. The DuroMax XP4000S reliably runs for an upward of eight hours when on a 50% capacity before you’ll ever need to refuel. Designed to offer the maximum comfort for users, the DuroMax XP4000S works great anywhere you want it on a job site, campsite, or as a backup during an outage. 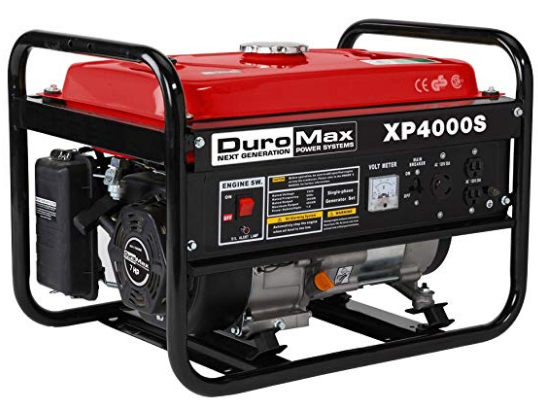 Users are thrilled about its efficiency when used as a backup supply during an emergency. Starting the generator and operating it can be swiftly done by anyone around because it is quite easy to turn on and off. A single pull on the recoil start is sufficient to start this portable RV generator when you need to.

Great features and reasonable pricing brings satisfaction on a purchase, but not without a look at the major features of the DuroMax XP4000S before going ahead to buy.

The high powered engine is designed with a strong steel frame that comes with four point isolated motor supports for smooth operation. Such power delivery from a mid-range power generator gives the reason the DuroMax XP4000S generator comes with endless uses as a standby generator, for job sites, and for RV.

Kudos to the design and effectiveness of the 7-HP engine, the DuroMax XP4000S is capable of handling moderate load capacity and power many devices at the same time. These can be done by connecting to the appropriate outlet to prevent damaging either the generator or any appliance.

This adaptable generator delivers electric current for equipment running on 120V. A 12V DC outlet is also provided for charging your battery and other low voltage devices with this output requirement. All these are connected accordingly as follows:

Built with proficiency in mind, the DuroMax XP4000S is the flawless power generator for homes, RVs, job site or campsite. It is equipped with a 4-gallon gas tank, making it able to run four hours on gas when running on full load capacity or eight hours when you go for a 50% load capacity.

I discovered that most RV and camping devices hardly load their generator above 50% of its total capacity. This consequently results in doubling the runtime on those occasions.

The DuroMax XP4000S has a tough metal frame assembled to withstand harsh weather conditions and enhance durability. The choice of steel as the design material of choice makes it a formidable force in strength and reliability. 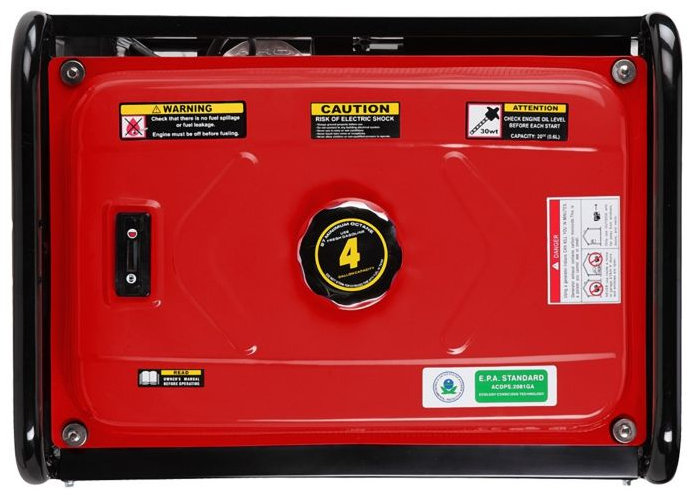 However, the DUROMAX XP4000S didn’t put in much into mobility features such as wheels and grab handles.

Its well-built construction comes with a shipping weight of 129 pounds and doesn’t come much as difficult when you need to move or lift it to a specified location for use. As a mid-range design, the unit is just moderate for its size. Definitely, you won’t have much of a stress moving it around to a location even without attached wheels.

The capability of a design is enshrined in its available features. For the DuroMax XP4000S power generator many things work together to make the unit what it is in efficiency and performance.

A range of features designed to simplify the workings or enhance safety also gives the DuroMax XP4000S more attraction and preference over other units on the market. Besides a potent engine, long hours of runtime and durability features also stand out. You’ll as well find whole other as these useful:

Apart from the features talked about that deals with performance, the noise level of the generator you’re buying is of major concern. A power generator is most times operated in a shed, from where sound can disturb both you and neighbors living nearby. Being aware of the noise level of your generator is crucial to make sure there is compliance with the noise regulation in your locality. 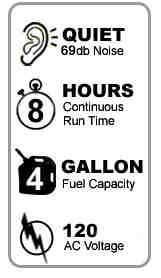 The unit may not be totally quiet. Coming out with a sound level measured at approximately 69dB, the DuroMax XP4000S runs fairly quiet compared to others in its category.

Users were very satisfied with the DuroMax XP4000S' efficiency and performance, describing the unit as durable. Many consumers have acquired the unit for home or leisure purpose and gave quite positive remarks about the product as a good buy.

The most commended aspect was the generator’s ability to run long hours on gasoline when on a 50% load. Appreciated were also the diversity of supported loads and the maximum output it runs as a mid-range generator that is designed for the outdoors and as a standby unit for homes.

A good one for the DuroMax XP4000S portable generator is that anybody can start and operate it easily. Its recoil start option is not a limiting factor as a single pull of the E-Z I recoil cord is sufficient to quickly start the generator.

The durable engine coupled with a strongly built metal frame gives the unit a great delivery to meet the need in power supply in homes and outdoors. Coming with the capacity to handle many devices at a time, it comes in as a reliable source to turn to during power outage.

Also, the low fuel shut-off feature enhances the durability of the system by switching off the unit to protect engine damage.

Safety is yet another advantage of using the DuroMax XP4000S generator because it comes with a circuit breaker to prevent your appliances from an excess power supply. On the unit is a low oil safety protection sensor, DC and AC regulators and also a spark arrestor to cap up the safety measures on the generator for long use. You also have access to the voltmeter to monitor the current or power output.

In spite of the great performance and many positive sides to the DuroMax XP4000S generator, quite a few other things do not make the unit complete in design features.

Unlike other generators of its kind, the unit does not readily come with wheels to enhance mobility. You’ll need to buy the wheels at a cost separately if you are in need of one especially if you intend it for campsite or job site use.

Sufficient outlets are not provided on the DuroMax XP4000S generator as you’ll find with other designs similar to it. This is a disadvantage to connecting multiple devices directly on the unit if the need arises.

Here is where you can buy your DuroMax XP4000S Gas Powered Portable Generator.